Drawing a Line Against Crime

Fall is almost here. With shorter days and cooler weather approaching, it’s the perfect time to dust off your reading list.

For those interested in forensic art, or true crime in general; I thought I would treat you to an excerpt from my book: SketchCop – Drawing A Line Against Crime.

SketchCop chronicles my start as a forensic artist while examining some of my most high-profile cases. The book also includes the history of police sketching, eyewitness memory and some safety tips to consider. It’s a great primer for those hoping to become forensic artists, or detectives who are curious about how this important investigative tool works.

Still interested? Well then, without further interruption, I present to you, SketchCop – Drawing A Line Against Crime!

You don’t know me. You probably wouldn’t even recognize me if you passed me on the street. However, it’s likely that you’ve seen one of my faces. Maybe you recognize the brand that I’ve left on the neck of countless criminals I’ve sketched over the last thirty-five years. Or maybe, until you began reading this book, you never really gave police sketches much thought at all. 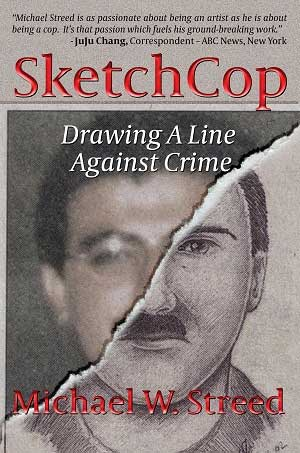 Much of my work is spent toiling anonymously behind the scenes of some of the country’s most horrifying criminal cases, though sometimes I am called out from behind my sketchpad to deliver a sound bite for a reporter curious about my work.

I find it interesting to be where I am today because my career as a police sketch artist was not planned. It became a secondary duty that paralleled my primary duties as a police officer and investigator.

Once I made the decision to follow my father into the family business, law enforcement, expectations ran high that I would rise into the executive branch of police management, as he did. For over thirty years, my father cast a long shadow across law enforcement in Orange County, California, a patchwork of crowded suburbs, thirty-five miles south of downtown Los Angeles, and there was much pressure for me to succeed. But I had no interest in the day-to-day operation of a police department. I was more interested in pursuing my childhood interest in art. Growing up not far from Anaheim, the home of Disneyland, I dreamed for years about becoming a Disney artist. However, once I was bitten by the “police bug,” I was determined to find a way to merge my interest in drawing with my burgeoning law enforcement career.

My successful career as a police sketch artist has long piqued public interest. Some of my sketches have made international headlines, while others, no less important, languish in anonymity.

A mystique surrounds police composite sketches, which involve the merger of art and science. To be successful requires me to assume several roles — pop psychologist, armchair counselor, artist, scientist and investigator. My job is to mine the memories of crime victims and eyewitnesses and create monsters from them. How I do that is the question I have been asked over and over again.

The secret lies in my ability to merge the details of a victim’s memory with the lines and shadows that I lay down on paper. And while it might seem odd that something so powerful could come from nothing more than a few recollections and well-placed scribbles, it’s a formula that’s helped bring many criminals to justice.

And justice, my friends, is what it’s all about…

Want more? Please click on the link below to receive your own copy of SketchCop – Drawing A Line Against Crime.

Until next month. Keep on sketching!